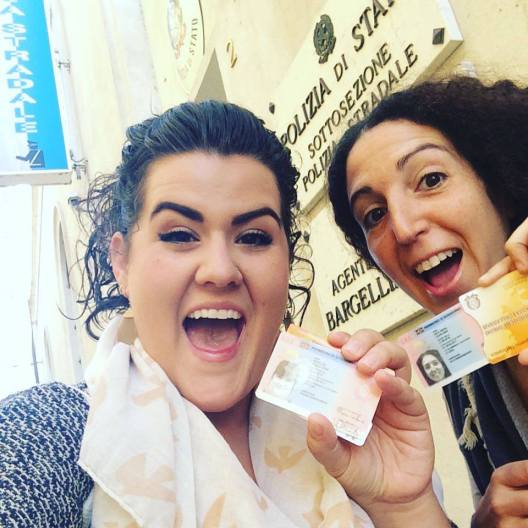 To anyone that asked me in the months leading up to my move to Italy, or even in the past six months of living abroad, my response to if I wanted to move back to the United States was always, not for the next decade or so.  But how does that saying go? Make plans and listen to God laugh? Because this girl is actually looking for an internship back in the ol’ US of A.

As a traveler, I was one of those that dreaded someone hearing that I was American abroad.  I just hated answering for everything other countries thought about my home nation.  Gun violence, healthcare, war, immigration, and now the Commander in Chief.  But in the past couple months or so something has changed.  Maybe its been being surrounded by other immigrants that are very proud of where they are from and want to return to it, or perhaps just having to defend my country and the ideals it was founded on and continues to support.  Whatever the reason, for the first time I can consciously think about, I am really proud to be from the United States.

I got my residency permit a week or so ago, and it was then that it really clicked that I am immigrant.  Having to survive the multiple headaches, hours of waiting and hundreds of euros, just to get that little card with my face on it.  It was so much work, just to be legal.  That same day, I had a conversation with a colleague that was complaining (to put it kindly) about immigration in their home country and how they felt their nation was being overtaken with foreigners.  They mentioned to me their agreement with President Trump’s anti-immigration moves, and that they believed that he was protecting the US.  My jaw dropped and blood rose significantly in temperature.

I took a deep breath and with as much tact as I could muster, explained that if the goal was to protect the country from immigrants it would be literally impossible.  As my colleague laughed, assuming that I was agreeing with them, I cleared my throat and confidently continued.  My country is a nation of immigrants. Hard working, dream driven humans built my nation.  I explained that if America didn’t accept the “others” they referred to, or grant comfort to those fleeing their homes and looking for a better life, we went against everything we were created by. For the first time I was exuding pride from more than simply being thankful for the passport that got me into foreign countries easily. I was proud of the freedoms we were built on and defend.

To understand it another way, I have always wished that I looked more ethnic, or was raised speaking the language of my ancestors (I guess I do, I am English).  But as I sit in a room filled with 30 foreigners in an Italian immigration office, I realize I can tell which country each of them are from just based on appearance.  If I was in a waiting room in the US with these same 30 people, I would assume they were all American.  Because no one actually looks American.  Isn’t that in itself so beautiful?  I wanted to look ethnically something, but little did I realize that this English/Italian/who-knows-what else, is perfectly, ethnically American.

Its been a real challenge and perspective changer to be an immigrant.  I have such a respect for those that give up everything for the “American dream” because living in a foreign country is hard. You’ve read all the stories that I make fun of the many times I mess up, but messing up is multiple times per daily. People don’t always tell you that being an immigrant and different does get easier but there is still something hard every single day.  Somedays you are more fit for the challenges than others.  You lie in bed thinking about how good your language skills shined or remembering when someone asked you for directions thinking you were a local.  Somedays are triumphs.

Others are just hard.  Maybe you’re not feeling well or are just overwhelmed, but somedays you feel out of place no matter what you do.  Forgetting to weigh your produce until you get all the way to the cash register, not remembering the right words for anything when all you want is the pharmacist to give you some cold medicine or simply getting a call from your nephew about his first loose tooth and feeling far away.  Those are the days you longingly watch an Italian speak wishing it was that easy for you, but forgetting that they think that about your English.  The guilty feeling of not needing it to be easy, but if it could just not be so hard.

This is the beauty of travel, the ability to see your life from the perspective of others. For so long, I allowed that perspective become my own.  When I talked to people who saw it negatively I saw it that way as well. I think one of the hardest parts for me was that I saw the US as having no real definitive culture.  Not in the way I was used to seeing around the world on my travels.  It seemed too neutral, too plain.  Much like my thoughts when learning the Italian language. I thought it was so weird that Italians had taken sounds from English and made them into different fancier sounding words.  I saw English as the neutral that all languages split off from or molded into their own.

What I naively saw as no culture, was exactly what makes the US so rich.  The melting together of various cultures. I think it was hard to see because I saw the world has being a challenge and America as easy.  How could I forget that like speaking your mother tongue or using your legs, things you have done as long as you can remember is all “easy”.  But the ease of something does not detract from its value.

Being an immigrant is a challenge, whether by choice or necessity, its hard in different ways.  It means being open to learning every single day, but also being open to making a lot of mistakes.  It is not for the faint of heart.  If you’re lucky, you’ll find a new home and an appreciation and love for the one you left.

“The land flourished because it was fed from so many sources–because it was nourished by so many cultures and traditions and peoples.”
Lyndon B. Johnson

2 thoughts on “The Pride of an Immigrant”