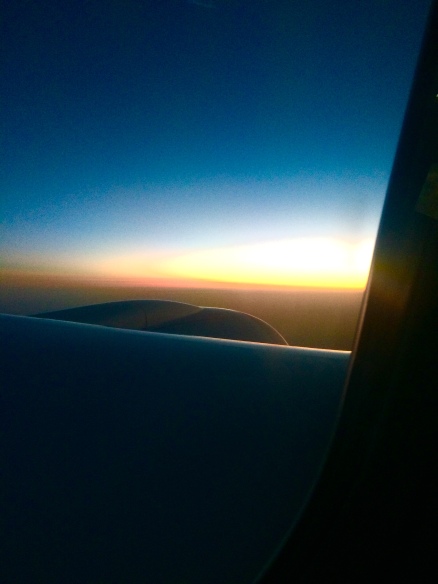 After 15 hours of flying, 6 hours on a bus and 7 time zones, we are finally in Japan.  It’s last study trip with my class, which feels a bit weird in itself.  And in a location that I never had on my bucketlist but after only nine hours in this country I’m leave hooked.  I have learned so much in simply arriving at an airport, taking a bus and having dinner.  Man is it nice to be in a location that makes you so wonderfully uncomfortable.

27 hours of traveling is no exaggeration.  We left Bra at 5am, took a 3 hour bus ride to Milan Malpensa before taking the first of two very long flights, five hours to Abu Dhabi in the United Arab Emirates with Etihad airlines.  The flight began with the pilot’s greeting in the beautiful melody of Arabic and a travel prayer from the Quran, and ended at the most beautiful airport I have ever seen.  Gorgeous tile work throughout all the terminals, and geometric metal light fixtures throughout the building.  We only had two hours to wander, but it was astounding.

As quickly as we came, we were off again, this time to Tokyo.  Another 10 hours in a plane, more movies (I think I watched every single superhero movie they had), a couple meals, and the most beautiful sunrise.  Ahhh, the pros and cons of the window seat.  You have the best views and something to sleep on, but two more people to disturb on the way to stretch your legs.  Naturally I just didn’t move for ten hours.  Let’s just say I was happy to land in Tokyo. 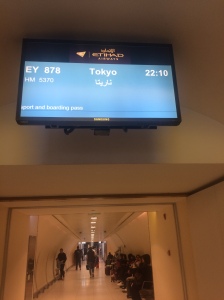 We touched down and were through immigration in no time at all (thanks US passport).  After collecting our bags and miraculously finding all of them had made it, we were off to meet our cultural bridge coordinators.  Our CBCs work for the Genuine Education Network, or GEN, a company focused on sharing the culture and gastronomy of Japan throughout the world.  Started by a former student, their company has been responsible for the organization of our trip on the ground.  They will be our tour guides and translators for the next ten days.

One from Japan and the other from Seattle, they spent the first half hour with us helping in exchanging of money, buying rail passes (for those that will stay after the trip) and purchasing SIM cards or WiFi.  Finally, we left the airport to find the bus and were greeted with a typhoon.  After not seeing a proper, torrential downpour, all day, rain storm in seven months, it was actually nice to feel it again.  Ask me again tomorrow after I’ve spent the day foraging in it, but for now it is lovely.

Once on the bus it was a three-hour bus ride from Tokyo to Nagano, our base for the next three days.  I climbed on the bus thinking something was off, but since I couldn’t put my finger on it I blamed it on jetlag and lack of sleep.  Once we pull onto the LEFT SIDE of the freeway I figured it out.  Our beautiful driver with white gloves (all drivers, even taxis, wear them) was on the wrong side of the bus, that was it! How did I live 24 years, and not know that they drive on the left in Japan?

Trying to get used to the left side of the road, I finally got tired and fell asleep.  After only three hours the night before we left, and about four in total on the flights, it was high time that I passed out.  I woke up at the rest stop and discovered the genius of Japanese bathrooms. First of all, they are so clean! My mum would love them.  Then, the toilet itself!  To put it simply, heated seats.  HEATED SEATS PEOPLE! Come on the rest of the world, lets adopt that.  There are about fifty-seven other buttons to play with, but after I pushed one that sang a song, I decided I should stop playing and leave. 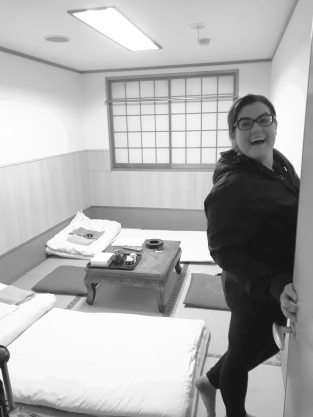 The rest stop also had a small shop, and of course vending machines.  Japan has more vending machines than people in the entire country of New Zealand.  They of course have the Japanese version of any other vending machine item (candy, chips, etc), but they also have hot vending.  You could buy hot tea, or a hot meal out of the machine.  It is simply astounding.

We reached the hotel for the night and finally finished our travels.  For the next three nights, we are staying in a traditional Japanese inn.  That means shoes come off at the front door of the building and are replaced by slippers to walk throughout the hotel.  Apparently, this is a very standard measure, and to be honest, I love it because it feels like home.  The rooms are very small, only for two, and consist of the traditional bed mats on the ground, a short table with a hot plate for tea, and a tv.

There is one bathroom with two stalls for each gender on each floor and a typical Japanese bathing spa, or onsen, for each gender.  These communal spas are basically the shower you would find in a locker room with four shower heads.  You shower to clean off and then sit a few minutes in the hot bath to finish off.  It’s a weird thing to get used to, but is so culturally standard you eventually come around.

Dinner was just next door to our inn, traditional bento boxes.  Starting with a miso soup of tofu and potato stalks which was delicious, we moved into the box.  Apparently, a traditional meal in the area, the chef explained that he enjoyed making boxes that were nothing special but indicative of what they would eat on a normal day, except using only what was local.  We had everything in our boxes, horsemeat with burdock root, potato salad, cooked watercress, and spinach, then a variety of pickled radishes and tofu, and an amazing fried pork.  For the most part, I loved it.  This will definitely be a week of working on my flexibility.

A sweet dinner to end a great first night in Japan.  We were so excited to get to sleep before a day of foraging in the typhoon tomorrow (never a dull moment with UNISG).  This week is going to be a ton of learning for me, not only in food related activities (thanks for the chopsticks lesson today Won), but cultural aspects as well.  Its been too long since I visited a place that really tested my comfort zone.  The challenge feels good.

For the next three weeks, I will attempt to get a post up every day or two, three days at the maximum.  The next three weeks will consist of ten days in Japan, one in China and another nine in India.  There will be so much to see and share.  I will do my best include photos, but some may be added afterward.  Looking forward to taking you all on the journey with me.