I never understood the term, “as far as the east is from the west”.  That is until I spent the last 10 days in Japan. The difference is astounding.  After doing all the cultural research and mapping your moves, you think you’re ready.  Truth be told, I don’t know that you can ever be fully ready.  The rest of the study trip was absolutely brilliant, from tea plantations and ceremonies at a Buddhist temple, to hiking to a Shinto temple on a mountain top and all the fish, rice and seaweed in between. This trip was the best, no contest.  But in looking back at the last week and a half, what made the biggest impression on me wasn’t the activities as much as this other world we were experiencing them in.

There is a quote I read somewhere that said, “there are two types of travelers, those who have been to India, and those that haven’t”.  While, we will soon see how true that sits, I feel that “India” here could be substituted by Japan.  As an American, we were so close to my country but felt like another planet entirely.  I loved every odd subtle difference. I will do another post about my favorite memories of this study trip, but I think first its most important to explain all these differences that made such an impact.

As is plain to see, my favorite part about new places are the differences, cultural, social, whatever those differences might be. Throughout the trip I kept a bit of a list in my phone about the things I noticed.  Now looking back at them, they break into three big sections, food, scenery and life.  So, after spending about a week and a half in the countryside of Northern Japan and down into Tokyo, here’s what makes this country so incredible.

First and foremost, this is the nicest and cleanest country that I have ever heard of or seen.  Everyone is outrageously kind.  They apologize for not knowing English well, or if they don’t know the place you are asking for directions about.  They open doors and are always so appreciative of your time.  Also this country is always clean.  Rest stop bathrooms? Sparkling.  Never is there trash on the ground or dirt indoors.  It is divine.

As far as smaller things go, it was a study trip so its probably easiest to start with food.  Tea is the lifeblood of Japan.  A green tea of some sort is always what is served with meals or offered when you enter a home.  If you are a fan of drinking water, you will have to ask specifically for it or bring it with you.  It’s incredibly rare to find a drinking fountain to fill a water bottle.  But the presentation of your tea at every meal is enough to make you swoon.  Sweet small tea cups without handles and every cup seems a little different.  Some places will bring you a tray of cups and allow you pick the one that speaks to you.  It’s a beautiful representation of the silent communication taking place throughout meals in Japan.

Meals always begin with a rousing “Itadakimas”.  Much like the Italians with “buon apetito”, it’s a blessing and happy eating wish over the food.  Breakfast is very different in Japan, and honestly, the hardest adjustment for me.  Traditional breakfast is fish, rice, seaweed, pickled vegetables and miso soup.  However, we did have a lot of American drip coffee at our disposal.  I did love filling my Hydroflask with coffee every morning.

Japan has also mastered the vending machine.  This country has them EVERYWHERE.  Even in the smallest villages you will see a couple vending machines on a street corner.  When you select what you want, sometimes it comes out cold or for some drinks you grab a warm tea or coffee.  Its brilliant.  I saw a couple machines where you could buy a TV dinner type meal, hot, from a vending machine.  There are also “convenience” stores at rest stops that are nothing but a room of vending machines.

Now, I think I am a very good eater.  The only things that I know I don’t like and don’t want to keep trying is raw meat (sashimi and carpaccio) and cooked greens.  The textures are just not my style.  However, in Japan I realized that although I may like things, there is a moderation to how many times I can eat pickled things, or fish.  I loved Japan, but I couldn’t live there because I am not a person that wants to eat that cuisine every day.  I lived on rice a lot of the meals.  Convenience stores and vending machines made all the difference for me.

When it comes to the scenery, the whole country looks oddly different and similar to home at the same time.  One of my favorite parts of Japan was the vibrancy and blast of the fall colors.  We spent most of our time out in the northern mountains, the Japanese Alps as they are called.  They are tightly packed with trees like the Pacific Northwest Rockies, however most of the trees are deciduous.  So if you imagine the mountains the size of the Rockies with the colors of the Adirondacks, you see something like Japan.  They give the most eerily stunning shadows at dusk, the kind that make them look as if a child drew outlines that go on forever. 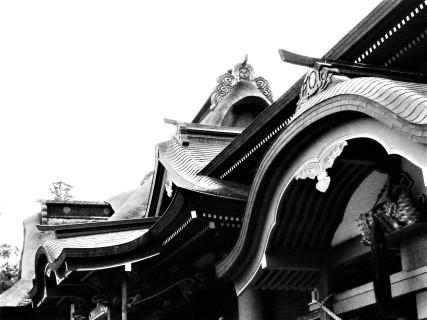 There are parts of the scenery that fit into exactly what you have built Japan to be in your mind.  The rooflines curving up at the end and temples around every corner.  In most Japanese villages, instead of house number the names of the owners are written behind the door.  The physical representation of the importance of community in this culture.  The temples are just what you imagine, a red so bright that it looks slightly out of place, and buildings that look like they came out of a popup book. 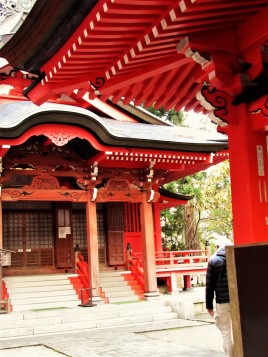 There are so many other things about the country are just plain different as well.  For example, there are fire extinguishers everywhere! Not just everywhere in buildings, but one day we hiked with the Yamabushi men (mountain men/monks/spiritual nature guides) up to the temple at the top of a mountain.  Along the 2,748 steps in the woods you would see many bright red boxes holding fire extinguishers.

There are also cultural things that you somehow just know about Japan, but kind of assumed had been modernized past.  For example, I didn’t sleep on a bed for the entire time I was in Japan.  Instead a futon mattresses on the floor, most times with a small bag of rice (no bigger than a 5lb bag of flour) as your pillow.  After a few days you can feel that it must be good for you, but lets be honest, this girl likes herself some plush. The more cloud-like the better.  You also traditionally eat on the ground, sitting on pillows in front of a table about a foot off the ground.

If you are coming to Japan, be sure to wear shoes that are easy to slip off and on again because you will be taking off your shoes a lot.  Growing up in a house that shoes were off at the door, this wasn’t weird the first few times, but after the 15th community center or hostel it seemed odd.  They come off basically everywhere, and then you switch into slippers to walk around (or just socks if you are like me).  To go to the bathroom, you simply switch into the “bathroom slippers”.

Another thing to prepare for as a foreigner coming to Japan, you stick out as western and you feel it.  You look different and depending on where you are, staring will probably occur.  Not to mention, the language is in characters and many places do not write it in English.  I couldn’t ever drive here between signs in characters and driving on the left side of the road.

Finally, if coming to Japan in the fall or winter be ready for three big things.  You’re going to bow, a lot.  To the point that I bowed to everyone that helped me in Indian immigration the other day.  They say that foreigners returning to their homes look like chickens because of the odd little bowing they do.  Second, bundle in layers or you will probably be cold all the time.  Its not like America where you leave a cozy home to get into a warm car. Odds are it’ll probably still be chilly.  As a girl who grew up in an old house that was a bit drafty and “learned character” by living in sweatshirts and wool socks, this was fine.  But the saving grace for those of you who are a bit colder, every toilet seat is heated.  I’ve mentioned it before, and I say it again, the Japanese have figured it out! It was the first thing that felt wrong when we arrived in China.

All in all, I loved Japan.  I think I could live in Tokyo quite happily.  Between the kindness of people, cleanliness of the country and having access to anything you could need in the biggest city in the world, I think I’d quickly find myself in love.  But for someone who loves everything that I love, and loves Japanese food all day, every day, you MUST go.  Buy the ticket, spend the time, and travel the countryside as much as the cities.  You will find the best souls and an adventure unlike anything else you’ve ever known.