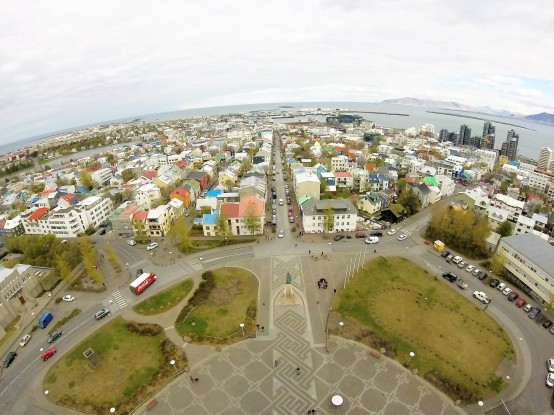 First and foremost, most people who are traveling on a flight to Iceland are not going to visit Iceland.  They are most commonly stopping through on their way to somewhere else.  Granted I only polled a few people, (thanks to a challenge from my sister) but everyone I talked to on my plane were only stopping through Reykjavik Airport.  Only one person I talked to was actually coming to spend a few days here, and a few were like me, spending a few hours roaming the city.  More people need to travel Iceland, these hours have been unlike anything I could have expected.

Iceland is such a diverse country in terms of landscape.  Landing in Reykjavik Airport and taking a 45 minute bus into the city through lava fields was completely unexpected.  It was one of those times where you know this island was created from volcanoes, but forget that it truly lies on the break between two plates of the earth’s crust.  Nestled on the edge of the North American and Eurasian plates, Iceland is one of the world’s most volcanically active countries.  And boy can you tell!  But after 45 minutes of what looks like a desert with lava rocks, the environment gets more lush with views of the sea on either side of the peninsula.  Before you know it, Reykjavik is all around you.

I had only a day, rather 12 hours, to explore the city and taste all that Iceland had to offer.  I had found another solo American traveler at passport control and we took off to explore together.  It was so relaxing to immediately have a friend to walk with and get a feel for the city.  After finding an ATM to get local currency, we purchased tickets for the Fly Bus in the airport for 4,000 Icelandic Kroner (about $30 for round trip) and were on our way.  Riding into Reykjavik we shared stories and I had to contain my excitement about being in a new place so my new friend wouldn’t think I was too crazy.  I think I muttered to myself about 12 times, “I love being here.  I can’t read the signs and it is so great!” It’s truly amazing just how alive I feel being here.  There is no doubt in my mind, this is exactly what I am meant to do.

Upon arriving in the city, the Hallgrimskirkja church was number one on my list of to-dos.  I wasn’t quite sure where to go, so I just started climbing the hill.  Most churches are at the top of hills right?  We found it no problem and I was immediately in awe.  Hallgrimskirkja is so unlike anything I have ever seen, let alone any church.  Also, for as interesting as the outside is, being made to model volcanic formations, the inside is so plain and bare.  The only piece of interest is the organ at the back that looks like something out of a children’s book.

Of course there was no way, that the possibility of going up inside the clock tower was going to pass me by.  I purchased my 6 euro ticket from the gift shop and boarded the world’s slowest elevator (I legitimately thought it was broken at one point because I couldn’t tell if we were moving).  But the view at the top was well worth the wait!  The first stop allowed a look out through the clock faces, such an interesting perspective.   There were also stairs up to the very highest observatory deck.  I love all towers, but this gave me a very interesting look at Iceland. The roofs of the buildings here are so beautifully colored.  It was as if this was a characteristic of Reykjavik that is only reserved for those who view it from the skies.

After the tower, my new friend and I explored the little streets, on the lookout for shopping and coffee to warm us up from the chilly wind.  Needless to say, the change from 70-80 degrees weather in Boise to 40-50 degrees here in Iceland was chilling me to my bones.  We stumbled upon the sweetest coffee shop, C is for Cookie.  The barista was so accommodating, explaining the currency and teaching us how to speak basic Icelandic.  A great memory and even better coffee.

Shopping around downtown is exactly what you would expect from this European town meets fishing village.  Adorable shops with great design and locally sourced products.  It did not take long to find the perfect scarf made from Icelandic lamb wool.  More than I usually spend for my traveling scarves, but so luxuriously wonderful! 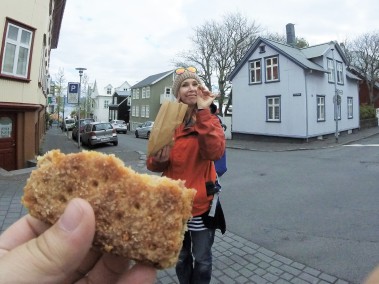 Walking down to check out the water, we made a quick stop at a bakery that we simply couldn’t walk by without our mouths watering.  We employed the ‘point and hope’ method to order the best rhubarb bar I have ever tasted.  Warm and crumbly in the best way!  Snack in hand we continued on our way and were greeted by the Sun Voyager Sculpture, a modern design based on ancient Viking ships.  Truly a beautiful piece of art set against the gorgeous backdrop of Iceland’s sea and mountains.  We struck our tourist poses, marveled at the view and took off towards the Harpa Concert Hall.  This building was made to replicate the scales of the fish that fuel the country’s economy.  It glitters in the sun and against the sea, a gorgeous building, but my mind was set on finding the next snack.

In my research, I had happened upon an article about Iceland’s hot dogs.  It spoke about the best hot dog stand in Reykjavik that was known for having a daily line.  As someone who travels through their stomach, I knew it was something I had to try.  We searched, asked people and after walking through a bit of construction, turned the corner and celebrated more than I believe the owner had ever seen someone rejoice over a hot dog.  Mentioning the blog I had found them through, I asked the owner for one with all the fixings.  It was by far the best hot dog I have ever had!

What made it so great?  First and foremost, Iceland’s hot dogs are made with lamb, and served with raw onions, grilled onions, ketchup, mustard and a secret sauce.  You know it’s good when the owner tries to explain the secret sauce, but can’t translate what goes into it.  This is my biggest recommendation of all if you are traveling to Iceland.  Locate the hot dog stand across from the Harpa Concert Hall and get one with the works, you will be so glad that you did.

My friend had to leave to catch her flight onto her next stop so I headed back to our lovely coffee shop from the morning for a slice of the apple pie that I had withstood temptation from that morning, and another cappuccino.  Taking a rest from walking to go through the day’s pictures and write-up the adventures was just what I needed.

In retrospect I must say, what I am feeling now that I am in a place with money that looks like play money, signs I can’t understand, and a language that sounds like gibberish, every ounce of nerves and panic from the past week was completely worth it.  I feel as though my soul is on fire, that I am complete.  I am so happy traveling.  Truthfully, I am kind of in love with the solo experience so far.  I think it has actually made me more brave.  It has made me brave enough to make a new friend, ask about language and customs, and overall I think it will make me become a better traveler.

If you can make a stopover in Reykjavik, whether you have a few days or a few hours.  This is truly an incredible place to experience and I would love to come back one day.  Next stop, Edinburgh, Scotland.

One thought on ““Excuse me, why are you going to Iceland?””